Nina Cook Silitch is a go-getter with a service heart, up for any adventure. She was raised in Vermont and after spending this past summer at Lochearn, wholeheartedly embraces the slogan, "What more could you want than a summer in Vermont?" This past year Nina worked for Camp Lochearn as the Covid Point Person facilitating testing and protocols for campers and staff. In addition, she was an Outdoor Adventure Program leader, and integral camp program, sharing the natural surrounding beauty with our campers. END_OF_DOCUMENT_TOKEN_TO_BE_REPLACED

Nina attended Holderness School in NH, class of '90. There she played soccer, captained the nordic ski team, and played lacrosse. While at Dartmouth College, 94', she was on the nordic ski team and was an active member of the mountaineering club, while serving as the Outing Club's safety coordinator as a Wilderness EMT. She graduated with a studio art degree and an elementary teaching certificate. Her love of the outdoors and other cultures led her to work at the National Outdoor Leadership School. Her love of cultures led her to work in China, Kenya, Switzerland, and France. In Switzerland, she was the head of the girls' expedition program at Aiglon College, an international boarding school. She received her MEd. from Lesley College with a focus on teaching through the arts. She and her husband, Michael, one of the first American international certified mountain guides, raised their two boys in the Alps. There, Nina realized her dream of competing in the world cup ski mountaineering as a US national team member. Her career culminated in a myriad of accomplishments, including two historical world cup gold medals, a world championship silver, and an ascent-descent of Mt. Blanc under twelve hours. Silitch founded and coached the Park City Ski Mountaineering Team, with a goal of growing the sport of ski mountaineering in the United States for youth. Nina holds a certification as Professional Mountain Bike Instructor and coaches young girls and boys in this sport. Her love of sport and empowerment for young women comes out in her coaching and teaching. Nina holds a National Certification as an Accredited Interscholastic Coach from NFHS as well as a Wilderness First Responder. She is an ambassador for Fast and Female, with a mission to keep girls healthy and involved in the sport as it influences positive results in life. She has over 25 years as an educator, teaching in public, private, and international schools. You might find Nina trail running in the mountains, painting a watercolor, or making sourdough bread. When not at camp, she lives with her husband, two boys, and Golden Retriever, Bella, and works as the head of the art department at a boarding school in the Upper Valley region of New Hampshire.

Favorite quote: If you can be anything, be kind.

Favorite thing about camp: the relationships and bonds that are formed and the growth that each girl makes. 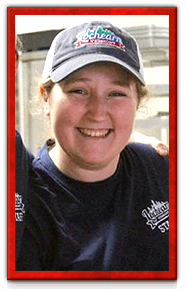 Patience grew up in the small town of Post Mills, VT—a true local here at camp. Since early childhood, she knew she was going to be a chef just like her father. Patience is inspired by the way food brings everyone together, and how a good meal can bring smiles to a child's face on a rainy day. Her craft started even in high school, when she attended a vocational school for half the day that was focused on culinary arts. She later graduated from Johnson & Wales University with a Bachelor's degree in baking and pastry.

After college, she worked in a variety of restaurants, and even worked in the main bakery of Epcot in Disney. Everything changed for Patience when she was contacted by Lochearn and offered a kitchen staff position here at camp. She was quickly inspired END_OF_DOCUMENT_TOKEN_TO_BE_REPLACED by the Lochearn spirit, which led her out of her comfort zone as a shy, soft-spoken person, and transformed her into a true leader. She moved through the ranks from her entry-level position to the dietary specialist, then to shift manager, and finally to Head Chef. She describes her years at Lochearn as "a joy and a challenge, which gave me the drive to excel."

Patience is passionate about cooking with fresh, local foods. She wants kids to be fed with less processed ingredients and more love and intention. She makes sure anyone with dietary restrictions feels safe and well-fed in our dining hall. More than anything, she wants to see our campers excited to eat here. Patience is inspired by and grateful for Lochearn, her second home, and works hard every day to make our dining program the absolute best. Amy graduated from The University of Montana in 1999 with a BA in Education. In her 20 year career as a teacher, she has taught multiple age levels and disciplines. Currently, she teaches middle school sciences and coaches Science Olympiad. She also teaches leadership classes to student counsel, 4H counselors, CIT's, and counselors at Camp Lochearn as a Mentor Coach.

Amy is the Athletic Director at Lone Rock School. She has coached volleyball for 30 years (6 years as a high school volleyball coach with 2 perfect seasons). She has also served as the middle school track coach for 20 years, as well as girls' basketball, and skiing in the winter.

Amy holds professional certifications in education, wilderness first aid and archery. END_OF_DOCUMENT_TOKEN_TO_BE_REPLACED She has long been involved in 4H events, including Winter Teen Camp, Rec Lab, and the Ravalli County Corner Cafe at the county fair. Before joining the Lochearn team in 2015, Amy spent four years as the director for Ravalli County 4H Camp. In her childhood and adolescence, she was involved with camp as both a camper and a counselor, and remembers those days fondly.

Amy is the sister of six brothers, the mother of four daughters, and the grandmother of two grandsons. In her spare time she enjoys letter boxing, swimming, kayaking, archery, hiking, biking and photography. 2022 will mark her 8th summer at Lochearn.

Adair is an artist, outdoor adventurer, teacher, gardener, and musician who is passionate about supporting children to grow and thrive. She spent her childhood attending multiple camps every summer for 10 years, and became a camp counselor for the first time at age 15. Her relationship with Lochearn began in 2013, when she was hired here as a cabin counselor and as the leader of Lochearn's Outdoor Adventure Program. She returned in 2014 in the same role, while also joining the then-brand-new climbing staff. Both of those years, she also taught nature classes and led music for Blue/Green Campfires and S-Night Campfires. END_OF_DOCUMENT_TOKEN_TO_BE_REPLACED

She stepped away from Lochearn for awhile in order to graduate from The University of Oregon with a Bachelor's degree in Outdoor Education. After college, she spent a year as a lead preschool teacher, and then set off to hike 800 miles of the Appalachian Trail. While on this life-changing journey, she met her husband, Arris, and the two have been adventuring together ever since. She spent several years as a one-on-one caregiver for children, as well as working as a fine gardener in Asheville, North Carolina. She managed the landscaping upkeep for multiple estates and expanded her knowledge and passion for native plants, and also launched her own small business selling her nature-themed artwork as stickers and postcards.

In the spring of 2021, Adair returned to Lochearn with her husband, Arris, to co-lead the Alpine Tower program. Now, they are both year-round staff members at camp. Adair is currently working in the camp office, hiring new staff, assisting with program development, and anything else that comes up as camp leadership prepares for the best summer ever in 2022. Their dog, Sina, will also be joining the Camp Lochearn family next summer. She is a very sweet and calm husky/shepherd mix who loves children, hiking, and paddleboarding.

When not in the office, you can find Adair writing songs, making artwork, or out rambling the hills with Arris and Sina.